Some of my Artwork

HMS Beagle anchored off an island in the Pacific Ocean. The Sun is about to set and the last of the survey boats are being recovered.

This work was inspired by a recent reading of Charles Darwin's "The Voyage of the Beagle". A great book if you're interested in natural history.

I thought the ship model turned out OK, but I wasn't happy with the sunset. I will revisit this work as my skills improve.

Wire-frame of the Beagle Model

After sub-patching, the model included just over one million polygons.

A squadron of British warships emerging from a fog bank sometime during the early 1800's. A first-rate leads the way, with a few 74's trailing. A barque, in the foreground, might be serving as a scout or courier ship.

The scene was inspired by my recent reading of several Horatio Hornblower books. Written by C. S. Forester, the eleven books in the Hornblower series follow the career of the fictional Royal Navy officer. The illustration does not represent an actual scene from the Hornblower novels.

The barque sailing along side the battle line is a modified version of my HMS beagle model. The first-rate, leading the column, is modeled after the HMS Victory. The 3rd rate 74's are not modeled after particular ships.

I had a lot of fun creating this scene. In the future, I will likely create many more sailing themed illustrations.

Several of the Texture Maps used for This Scene

The first image is a color map for the 1st rate, while the second includes details for the sails. The third image, along with other textures, was used to create the ships wake.

A Viking long boat, riding out a storm, presses westward across the north Atlantic.

This piece was inspired by a line from one of my favorite songs. "On we sweep with threshing oar, our only goal will be the western shore." - Led Zeppelin's "Immigrant Song."

This alternate history piece centers on a towering, pyramid shaped complex. The imposing structure is surrounded by a thriving port city.

I wanted to create a design that is fantastic and stirs the imagination, and, at the same time, is structurally and historically plausible. A structure that we could have built in our distant past.

This illustration was created in Lightwave 9.6, and includes around 655,000 polygons. The city sprawl in the background is comprised of over 1,000 buildings. The scene also included over 1,000 people, 500 trees, and 38 ships.

Inspiration for this illustration included both historical and fictional references, including the Great Pyramid of Giza, the terraced complex at Machu Picchu, and the fictional city of Minas Tirith from The Lord of the Rings trilogy.

The first image is a close-up of the illustration. The second image is a color map used to create the roads among the background buildings. The third image shows a sectional comparison of the actual great pyramid, and the fictional design.

A futuristic mining vehicle working a deposit on the surface of Mars. The idea is that this thing would dig up mineral deposits, in this case an ice layer, crush the material and separate out useful chemicals. Things like water, iron, carbon, and other elements would be separated, refined, and stored. The machine would periodically return to base and offload containers of refined material.

The look was inspired by a variety of current technologies, including excavating equipment, crawler transporters used for the space program, offshore oil and gas production facilities, and chemical refineries.

This one makes a great wallpaper, the colors are dark and most icons stand out very well.

The first image shows an early version of the model. The second shows the wire-frame for the finished model. The third is in anaglyph 3D.

A fictional ship, from a hypothetical war between the United States and England during the 1860's.

I've wanted to do a cut-a-way view for a while now. I thought for my first cut-a-way design a fictional ship might be the way to go. I could concentrate on technical aspects of creating the view, without the need to accurately depict an actual ship.

I had a lot of fun creating this illustration and have several other cut-a-way designs in progress.

Inspired by watching buildings and roads pass below while flying into Detroit Metro Airport after dark.

The scene shows a typical collection of light industry and commercial buildings. The final design was completely lit from within the scene. No external lights were used. The scene is fictional and does not represent an actual location.

An alternate history piece based on Herman Melville's "Moby Dick". In this time-line, Ahab and the crew, after a short and largely uneventful chase, have successfully killed Moby Dick. The try-works are fired up and the crew is preparing to render the great leviathan into lamp oil.

His plan for vengeance carried out successfully, Ahab would retire from whaling upon returning to Nantucket. Earning his living as a landscape painter of only marginal talent, Ahab spent his remain years in relative obscurity.

I have created well over a hundred illustrations for my space history website, HistoricSpacecraft.com. Most of these are Orthographic projections of various spacecraft. Many of the illustrations feature several missions and include an astronaut figure to give a sense of scale. 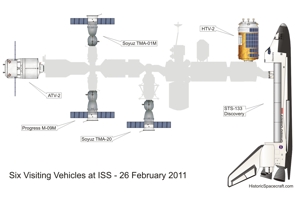 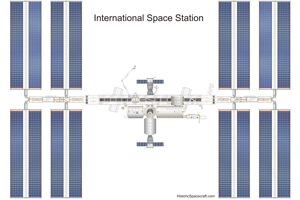 Space probe diagrams using a series of renders I created in the 1990's using TurboCad.

Created in the 1990's using Turbocad, these illustrations were used for planning purposes by the museum staff.

In 2005, the Jackson Model Rocketry Club commissioned me to create a high resolution Saturn 5 illustration for their organization. Here are some images of the finished artwork on the clubs trailer.

These photos were taken on August 10, 2006 at an aviation event in Mason, Michigan.

For more information about the club, visit the Jackson Model Rocketry Club website.